It was a dramatic day at the race track as the second half of the 2016 United States Pro Kart Series began. The GoPro Motorplex provides a great facility for racing, among the best in the country, and it did not disappoint. There is a sense of increased intensity amongst the drivers, although most of the racing was clean. Off the track, two of the USPKS staff were sent to the hospital for separate aliments, and please send your thoughts with Tony Wyse and Randy Kugler as they work toward 100% health.

On the track, the Pro categories were bested by rookies Brandon Lemke and Zach Holden. The other three age groups saw three drivers double up on the day with Sam Mayer, William Robusto, and Mateo Rubio-Luengo. The championships in the Cadet divisions took a turn at the end of the day with Kaden Wharff excluded from the event for the remainder of the weekend.

Brandon Lemke (Merlin) entered the weekend as the championship leader, and remains the driver to beat with his third victory in the Franklin Motorsports IAME Pro category. Ryan Norberg (Tony Kart) recorded his first pole position of the season with Lemke in the second spot. The point leader claimed the opening heat race but a wild start to the second dropped the Franklin Motorsports driver down the order, finishing 11th, along with shuffling up the rest of the field. Zach Holden (Tony Kart) grabbed the win after an amazing start, jumping from P4 to P1 in the opening corner. Holden earned the pole position for the main event with Norberg slotted on the outside. Lemke started third, and by lap four, took the lead away from Norberg who grabbed the holeshot. Consistent laps, including the quickest of the race, allowed Lemke to lead the remainder of the 18-lap event for the victory. The rest of lead group fought for second with Braden Eves (Kosmic) eventually working his way to the position by the last lap. Heading to the hairpin, the Round One winner spun all on his own under breaking, sending the group around him. This gave Holden the path to the second position on the podium as Bradley Zilisch (Tony Kart), who ran second for much of the race, in third. Austin Garrison (CompKart) ended up fourth with Norberg dropping to fifth. Eves continued on to finish 10th, moving the rest of the top-10 up a position, including TJ Koyen (Exprit), AJ Myers in his TB Kart debut, Jacob Donald (Praga) and Brandon Jarsocrak (Praga). 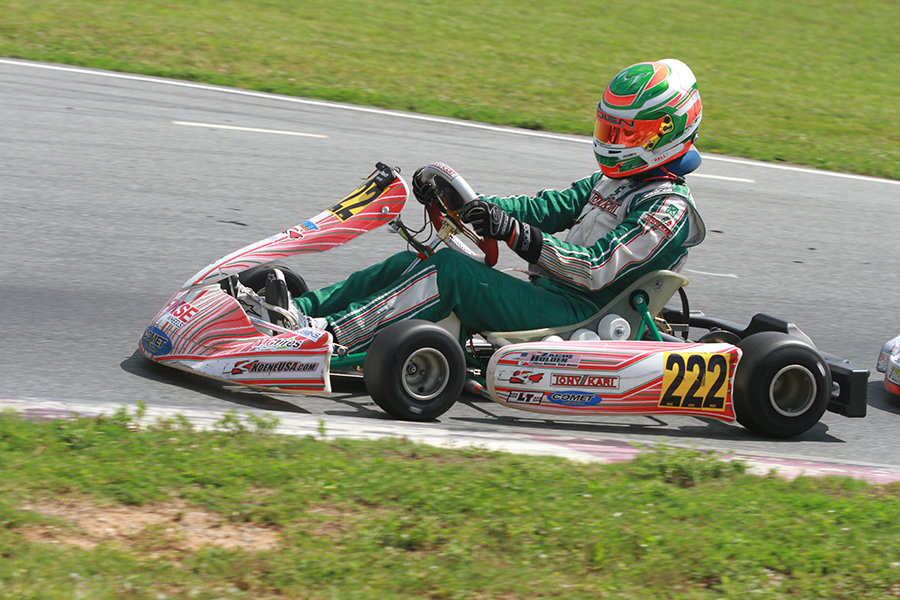 The Comet Racing Engines Yamaha Pro race came down to a four driver battle over the 18 laps. Double heat race winner and championship leader Dakota Pesek (Top Kart) stood on the pole with veteran Chuck Tate (Parolin) outside. The race was restarted after a flip on the original opening lap by Emily Hurlbert (Exprit). She was checked and returned to complete the 18-lap race after restarted at the back of the field. The front row was joined by top qualifier Brandon Lemke (Merlin) and Zach Holden (Tony Kart). Pesek led the first half with Lemke – driving with one hand for a number of laps – moving to the point at lap eight. With just two laps to go, Holden made his move, taking over the top spot. Tate put himself into the challenger position but a mistake on the final lap allowed Holden to pull away. The Comet Kart Sales driver earned his first victory in the category on the season. The battle for second went to the final corner with Lemke and Pesek each slipping past Tate for the final podium positions. Jake Venberg (Merlin) recorded his best finish of the season, winning the battle for fifth. 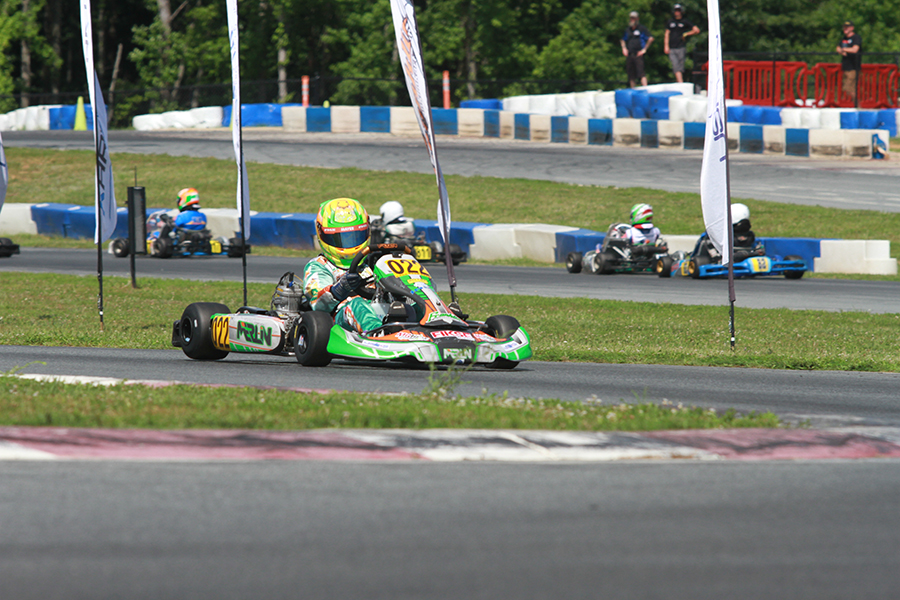 Sam Mayer put in a dominating performance during the Innovative Performance IAME Junior for his second victory in the category. Mayer was the top qualifier and won the second heat race after Lance Fenderson (Tony Kart) won the first. They started from the front row, with Mayer shooting out to a big advantage and Fenderson back to 13th on the opening lap. Mayer drove away to the race win with a comfortable lead. The fight was for second with Myles Rowe (Tony Kart) holding the position the first half until Alex Bertagnoli (Merlin) slipped past along with Austin Schaff, making it a Merlin 1-2-3 finish. Rowe drove defensive in the closing laps, eventually getting sideways after contact after the hairpin. This helped the charging Fenderson to take over fourth with Blake Hunt (Tony Kart) in fifth.

Merlin karts led all day in the Woltjer Racing Engines Yamaha Junior with Austin Scahff setting fast time in qualifying and the opening heat and Sam Mayer winning Heat #2. They led the field to the green flag, only to have Alex Bertagnoli (Merlin) knife his way to the point. He and Schaff took turns at the lead until Mayer became the leader on lap five. The Junior rookie pushed quick laps, but the field kept pace with Bertagnoli leading the charge. Prior to taking the white flag, Alex took back the lead with Mayer fighting back starting the final lap. Bertagnoli tried a late move into the hairpin, but Mayer fought it off. Sam reached the checkered flag first, earning ‘Mayor of Mooresville’ for the day with his second victory. Schaff was able to beat Bertagnoli to the line for second, completing another Franklin Motorsports / Merlin sweep of the podium. David Kalb (Tony Kart) had his best performance of the season placing fourth with Emory Lyda (Merlin) the same in fifth. 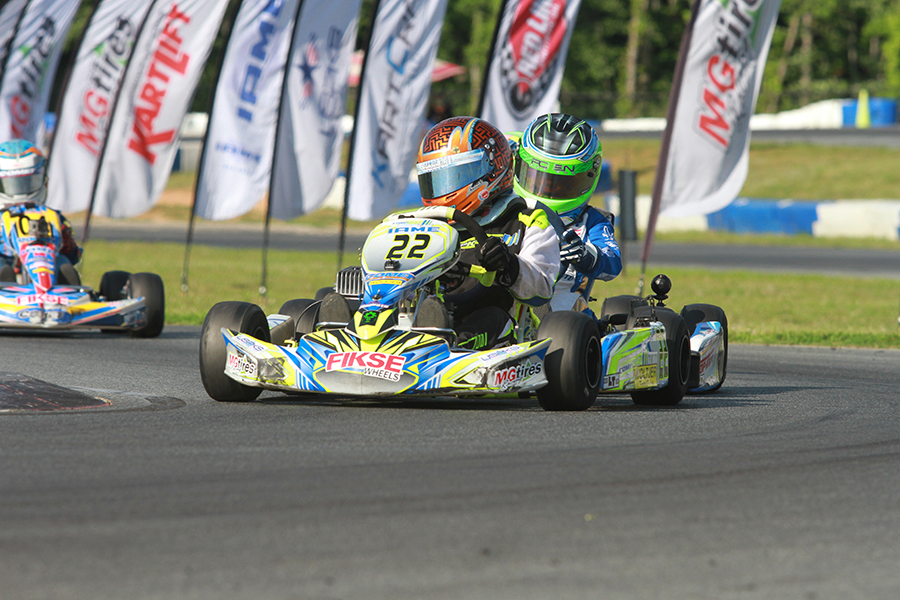 Reece Gold entered the weekend as the championship leader in Allison Racing Engines IAME Cadet. A tough session in qualifying put him ninth in the 24-kart field, working his way forward in the heats to start third behind Isebella Robusto (CompKart) and fellow Benik teammate Tyler Maxson. Gold knifed his way to the point in the opening circuit of the 15-lap main event and looked to have the field covered. A group stayed close despite their shuffling, including Maxson. They got racey heading into the sweeping corner with two laps remaining, and contact between the teammates sent both off course. Gray Leadbetter (Top Kart) took over the point with Robusto trailing. William Robusto (CompKart) had fought his way up from 13th into the lead group. Shuffling continued on the final lap, with William able to move into the lead in the final corners, crossing the line for the victory. Aiden Crouse (FA Kart) was a close second with Isabella placing third. Leadbetter dropped to fourth with Elio Giovane (Benik) in fifth.

The complexion of the Switch Racing Engines Yamaha Cadet title chase took a major turn following the events on the day. Prior to the weekend starting, championship contender Garrett Adams (FA Kart) was admitted into the hospital for an infection and high fever. His parents placed brother Logan Adams into a substitute position. Adams drove his butt off in the two heat races, coming from 18th to fifth in both. Championship leader Kaden Wharff (Top Kart) won both races after qualifying fifth, and led the field to the green flag for the 15-lap main event. After the halfway point, William Robusto (CompKart) put himself into the lead and was able to pull away as Wharff was under attack from a group wanting the second position. Robusto held on to the checkered flag, earning his second victory of the weekend. Caleb Bacon (Parolin) was able to beat Wharff to the line for second, but after the checkered flag is what made a major impact. After the photo finish, Wharff drove into the side of Bacon, sending it off the course. Officials deemed the action unsportsman-like, and disqualified him from the race along with excluding him from the rest of the weekend. This promoted Adams to third followed by Aiden Crouse (FA Kart) and Isabella Robusto (CompKart). 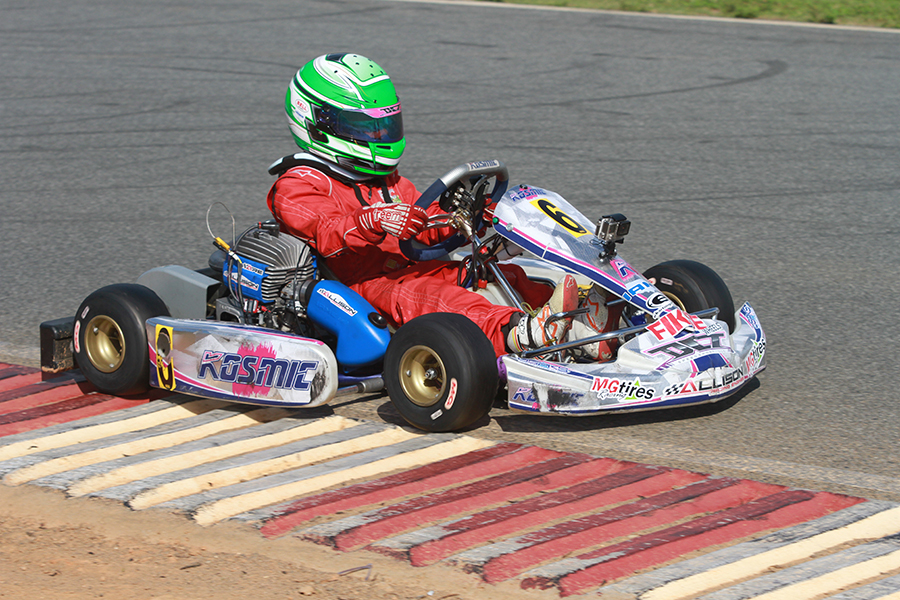 The Rookie divisions were triumphed by Mateo Rubio-Luengo. The fight in the Motorsports Driver Development IAME Rookie division went from two to three after Paige Crawford (Tony Kart) got the holeshot from P3, jumping head of championship leader Brett Crews (Energy) and Mateo (Kosmic). All took a turn at the point, with Mateo making it the final circuit, crossing the line just 51 thousandths of a second ahead of Crawford, ending Crews win streak at four with his third place finish. Alex Powell (Birel ART) ended up fourth with Sam Corry fifth. Alex Powell was the top driver in the QPS Employment Group Yamaha Rookie early on, besting qualifying and the opening heat. Mateo won Heat #2 and set the pace in the main. Crawford and Powell were right there, until Crawford lost the end cap of her exhaust, ending her race early. Mateo led the remainder of the race to earn the victory ahead of Powell. Eli Trull (Arrow) completed the podium ahead of Christian Gordon (Arrow) and Elliot Cox (Benik).