The final day of racing took place Sunday at the Ocala Gran Prix facility for the opening weekend for the 2021 United States Pro Kart Series presented by MG Tires. Round Two was the second and final day of racing at the Ocala, Florida facility for what will be eight rounds of racing this season. A record 293 entries in seven categories battled for another full day of action around the ‘bullring’ of karting.

The Franklin Motorsports category remained tough all day long. Senior rookie Alessandro de Tullio (Parolin USA) was able to clear the 39-driver field in qualifying by one tenth of a second, posting a 36.911-lap. The 16-lap Prefinal was all de Tullio at the point as he led every lap with Diego Ramos (REM / Kosmic) holding second. As it was anticipated, the start was very eventful with contact through the opening corners and a large number of drivers collected in a pile up in the bus stop after getting the green flag. Up front, de Tullio held the lead ahead of Ramos, who would drop a wheel on lap two in front of the entire field on the exit of turn four. Thankfully he would not collect anyone. That allowed Senior rookie Connor Zilisch (Nitro / Redspeed) to move up into second, and eventually into the lead by lap five. That triggered the downfall for de Tullio, slipping back to fourth behind Ryan Norberg (RPG / Kosmic) and Saturday winner Arias Deukmedjian (Zanella / Kart Republic). They would have about a kart length or two apart from each other for the remainder of the race as Zilisch went on to earn his first Senior victory in USPKS competition. Norberg ended up second with Deukmedjian in third. It was de Tullio and Mathias Ramirez (SCR / Redspeed) that completed the top-five. Zilisch took home the $5,000 payday, with Deukmedjian second in the money podium and Ramirez third. 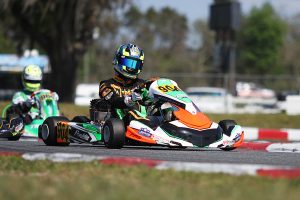 The Mike Doty Racing KA100 Senior race went down to the wire and after for the 57-driver field. Saturday winner Connor Zilisch (Nitro / Redspeed) set fast time in qualifying with Fast Friday driver Nicholas Terlecki (FMS / Merlin) and Alex Bertagnoli (FMS / Merlin) within 75 thousandths. Bertagnoli beat out both Brandon Lemke (FMS / Merlin) and Zilisch for the win in Prefinal ODD while Chase Jones (MPG / Will Power Kart) took advantage of strategy to come away with the win of Prefinal EVEN. Bertagnoli led the early few laps of the Final until he was shuffled back to sixth. Jones took over the point until Lemke gain control of the lead on lap six. From there, Lemke established a good lead until Zilisch put himself into second and slowly cut into the gap. As Zilisch closed, so did Bertagnoli, closing in on the top-two. Zilisch took over the lead on the white flag lap, and Lemke was quick to strike on the final circuit. The two made contact in turn three and the side-by-side continued into turn four. By then, Bertagnoli was there to help Lemke push through, as they went 1-2 through the final corners to the checkered flag. AJ Myers (Magik Kart) would be able to work past Zilisch by the checkered flag as well. The order on the podium was changed with Lemke receiving a two-position penalty for avoidable contact. That put Bertagnoli on top of the podium with Myers to second and Lemke down to third. Zilisch remained in fourth with Terlecki winning the fight for fifth. 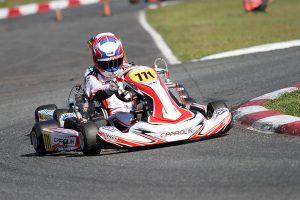 Sunday was a debut victory in the Rolison Performance Group X30 Junior class. Jack Jeffers (PSL / Birel ART) found more speed overnight to set fast time in qualifying, edging out Noah Baker (Supertune / Tony Kart) and Cameron Brinkman (FMS / Merlin) by 65 thousandths. Starting fifth in the Prefinal was Paul Bocuse, making his debut weekend with Parolin USA. Bocuse was quick early, moving up to the lead by lap four and went on to win. Bocuse led the 40-driver field to the green flag for the 22-lap Final. Baker and Saturday winner Jeremy Fletcher (TF / EOS) filed in behind and the trio ran that way the entire distance with Bocuse winning his first series victory. Christian Miles (MDR / Kosmic) charged his way forward from 10th and nearly pulled off a move for third on the final circuit. Cameron Weinberg (Supertune / Tony Kart) completed the top-five. 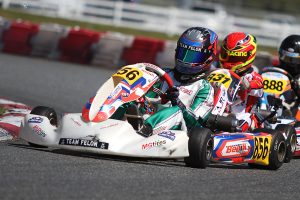 Picking up his third victory on the weekend in the Timmy Tech KA100 Junior class was Jeremy Fletcher (TF / EOS). Fletcher set fast time in qualifying to edge out the 48-driver field with Noah Baker (Supertune / Tony Kart) only 43 thousandths off. Both Fletcher and Baker won their respective Prefinals to land on the front row for the Final. Fletcher led the opening half until Baker led for a few laps until the top qualifier returned to the point. From there, fighting for second allowed for some space for Fletcher in the lead, going on to score the victory. Danny Dyszelski (Magik Kart) was second at the checkered flag until he was given a two-position penalty for pushback bumper. That promoted Sebastain Wheldon (JC / Kosmic) to the runner-up spot and Austin Jurs (FMS / Redspeed) the third step on the podium. Baker ended up in the fifth position. 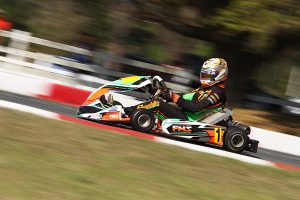 The day belonged to Scott Kopp (FMS / Exprit) in the Speed Concepts Racing X30 Masters class. It was not a total sweep as Danny Robertson (RPG / Kosmic) pulled off the fast lap in qualifying, edging out fellow Florida driver Robert Maier (RPG / Kosmic) by five hundredths. Kopp was fourth in the session and slowly worked his way to the point in the Prefinal for the win. That was the winning move on the day with Kopp leading all 22 laps in the Final for the victory. Robertson drove to second with the fight behind him for third. Roberts was in the position until he was shuffled back by Saturday winner Mario Barrios (RPG / Kosmic) and John Robicheaux (RPG / Kosmic). Roberts got one position back before the checkered with Barrios in third, but a two position penalty for pushback bumper dropped Barrios off the podium, moving Roberts to third and Robicheaux to fourth. 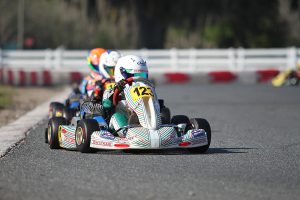 The Trinity Karting Group Mini Swift class went down to the wire for a second straight day. Diego Ardiles (Supertune / Tony Kart) set fast time in qualifying and won his Prefinal. Ben Maier (Nitro Kart) joined him on the front row with his Prefinal win. Three drivers drove away in the Final with Ardiles and Maier joined by Saturday winner Enzo Vidmontiene (Benik). Each took a turn at the point until Ardiles was leading at the white flag. The trio went shuffled up over the final circuit, including some three-wide action. Maier was leading as they went into the final corner, and a slight bobble slowed his pace out of the corner. This allowed Ardiles to get a run, edging out Maier by 32 thousandths with Vidmontiene only 68 thousandths off. Tyler Roberts (Parolin USA) drove to fourth with John Antonino (Race Factory) in fifth. 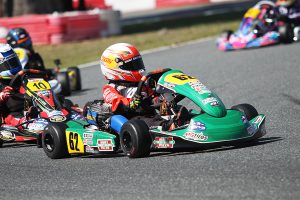 A new winner was added to the USPKS list in the Team Ferris Racing Micro Swift class. Keelan Harvick (Nitro Kart) set fast time in qualifying while Gianmatteo Rousseau (Nitro Kart) drove to the win in the Prefinal. Rousseau led the opening circuit of the Final until Harvick took control. Harvick fought strong to hold on to the lead once there, with Rousseau able to get the lead back but only for a brief moment before Harvick took control again. On the final circuit, they along with Saturday winner Isaac Malcuit (AKT / Kart Republic) fought for position. Rousseau tried to find a way past Harvick when he made contact with the rear corner of his kart at the tree corner. That slowed Gianmatteo’s pace, allowing Harvick with enough space to reach the checkered flag first to earn his first USPKS victory. Malcuit was able to work past Rousseau for position, along with Augustus Toniolo (RPG / Kosmic) by the checkered flag. Ethan Tovo (Nitro Kart) completed the top-five.

With one event in the books, the United States Pro Kart Series now looks to the second stop of the 2021 calendar. Competitors will take to the New Castle Motorsport Park for the Heartland Grand Prix on April 30-May 2.