The 2021 United States Pro Kart Series presented by MG Tires kicked off with the first official day of competition on Saturday as a record number of 293 entries competed in the seven IAME categories around the Ocala Gran Prix. The Ocala, Florida facility is packed with competitors, teams and karting families to open up the ninth season for the program, with picture perfect weather throughout the day following a solid practice day on Friday to contest Round One of the eight-round season.

The Franklin Motorsports X30 Pro category was packed with 39 drivers on the day. Four-time SKUSA champion Ryan Norberg (RPG / Kosmic) was able to set fast time in qualifying, that saw the top-seven all within 92 thousandths of a second. In the Prefinal, Norberg led the opening circuit before Mathias Ramirez (SCR / Redspeed) took over. Laps later, Norberg was shuffled back after contact with Pauly Massimino (MDR / Kosmic) fighting for the second spot. Ramirez was able to get away clean to score the race win with Kyffin Simpson (SCR / Redspeed) winning the fight for second. Ramirez led the field to the green flag and led the opening five circuit until Senior rookie Connor Zilisch (Nitro / Redspeed) took over the point for the first time. He led two laps before Ramirez took back the top spot. Waiting in the wings was EKN Driver Rankings co-#1 Arias Deukmedjian (Zanella / Kart Republic). The lead pack was four for much of the race with Braden Eves (MGP / Will Power Kart) and Deukmedjian trailing. After Zilisch stint at the point, Deumedjian began making his way forward, working past Eves and then Zilisch when he was dropped back to second. With three laps remaining, Deukmedjian pulled the trigger on Ramirez, taking over the lead. From there, Arias would go on to win the opening round for a second straight year in the X30 Pro division. Ramirez settled for second with Zilisch a third in his USPKS Senior debut. Eves trailed in fourth, improving from P8 on the grid. Four-time defending champion Brandon Jarsocrak (MDR / Kosmic) started fourth but contact on the opening lap dropped him down the order. He fought back to put himself into the fifth spot, and nearly ran down the top four before the checkered flag came out after 22 laps. 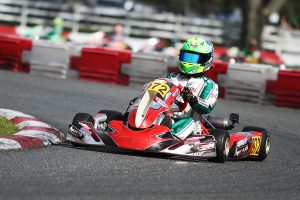 Connor Zilisch (Nitro / Redspeed) dominated the day in the Mike Doty Racing KA100 Senior division, featuring 60 drivers. Zilisch and Nitro / Redspeed teammate Hayden Jones went 1-2 in qualifying, and each would start the two separate Prefinals from the pole position. Zilisch led all 16 laps in his race, while Jones duplicated the feat in his. Zilisch led the field to the green flag and from there, went wire-to-wire. The Senior rookie led all 22 laps of the Final for his first victory in the category. Defending champion Brandon Lemke (Franklin / Merlin) moved up from third to second early, and held his ground, unable to challenge for the victory. AJ Myers (Magik Kart) improved one spot to third early, and stayed as the top three ran static for much of the race. Jones fell down to seventh on lap two, but worked his way back up to fourth with Nolan Allison (RPG / Kosmic) completing the top-five. 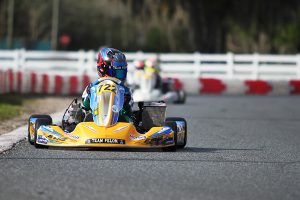 It was a unique battle in the Rolison Performance Group X30 Junior category on the day. One thousandths of a second separated the top two qualifiers with Rowan Gill (MDR / Kosmic) edging out Noah Baker (Supertune / Tony Kart) for the top spot, with the top-five within one tenth. Jeremy Fletcher (TF / EOS) was fifth in the session, but made quick work in the Prefinal to get to the front and score the race win. Fletcher ran a defensive line through the opening laps of the Final, which bunched up the field early on. Fighting for second eventually allowed him to get away to a solid lead. Kekai Hauanio (OGP / Tony Kart) eventually got away with the second spot, but the lead was too much for Fletcher as he led all 22 laps for the victory. Hauanio drove to second in his USPKS debut with Gill ending up third. Cameron Weinberg (Supertune / Tony Kart) and Justin Adakonis (MDR / Kosmic) completed the top-five. A great drive was put in by Paul Bocuse (Parolin USA), who retired in the Prefinal after contact. Bocuse made up 32 positions to go from 40th to eighth. 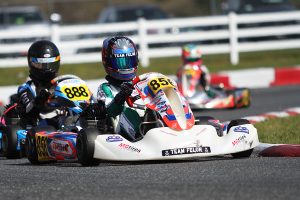 Fletcher was able to earn a second victory on the day after being named winner in the Timmy Tech KA100 Junior division. Noah Baker (Supertune / Tony Kart) set fast time in qualifying ahead of the 48-drivers in the field. Baker was shuffled down to sixth in his Prefinal as Chase Hand (RPG / Kosmic) won that race, while Fletcher won the other Prefinal. Hand led the opening eight laps of the Final until he was shuffled back and continued falling late in the race to end up seventh. Fletcher took over for three circuits until Danny Dyszelski (Magik Kart) worked his way to the point by lap 12. From there Dyszelski was able to pull away from the rest of the field, driving to the provisional win. Following tech, Dyszelski was removed from the results, thus handing the win to Fletcher. Parker DeLong (RPM / Tony Kart) was classified second with Sebastian Wheldon (JC / Kosmic) into third. Xander Reed (Parolin USA) and Helio Meza (IRM / Tony Kart) rounding out the top-five. 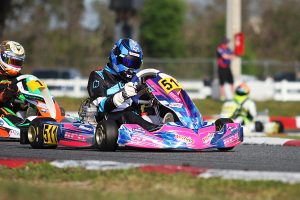 Scott Roberts (SCR / Redspeed) appeared to have the day wrapped up in the Speed Concept Racing X30 Masters class. Roberts set fast time in qualifying and led all 16 laps in the Prefinal. He would jump out to the lead in the Final with four drivers trailing, including Mario Barrios (RPG / Kosmic), defending champion Scott Kopp (Franklin / Exprit) and Danny Robertson (RPG / Kosmic). Barrios sat behind Roberts until lap 15, when he dove inside at turn five. On the exit, the two made contact and Roberts was sent off into the grass. Roberts would rejoin and end up finishing 10th, but docked two position for pushback bumper penalty. Barrios took the lead and went on to score his first series victory. Robertson worked past Kopp for the second step on the podium with 2019 title winner David Galownia (Timmy Tech / CompKart) fourth and 2018 champ Laurentiu Mardan (TecnoKart USA) fifth. 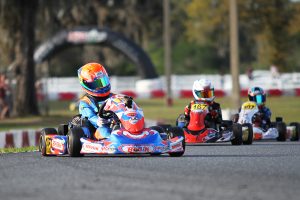 The Trinity Karting Group Mini Swift class went down to the wire with a photo finish. California driver John Antonino (Race Factory) came out of qualifying with the fast time over the 41-driver field, but slipped to third in his Prefinal with Ragan Saville (Speedsportz / Birel ART) earning the win. Diego Ardiles (Supertune / Tony Kart) won the other Prefinal to join Saville on the front row for the main event. The front of the field shuffled around during the opening circuits before Enzo Vidmontiene (Benik) took control. He led for four laps before Kai Johnson (AKT / Kart Republic) took a stint at the point and then Vidmontiene reclaimed the position. In the lead, Enzo held a solid advantage until getting run down late by a charging Ben Maier (Nitro Kart), who started 11th. On the final circuit, Maier was close enough to challenge, making his move in the final corner. He was able to get inside of Vidmontiene, pushing him wide through the exit of the turn. They came out side-by-side, with a drag race to the checkered flag. A very close finish ended with Vidmontiene edging out Maier by seven thousandths of a second for his first series victory. Oliver Wheldon (JC / Kosmic) won the fight for third over Ardiles and Tyler Roberts (Parolin USA). 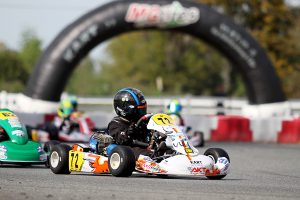 Two drivers were the class of the 39-driver field for the Team Ferris Racing Micro Swift class. Isaac Malcuit (AKT / Kart Republic) and Keelan Harvick (Nitro Kart). Malcuit struck first with fast time in qualifying while Harvick came away with the win in the Prefinal. Malcuit found himself fifth in the race, but fought his way forward early on in the Final. The two exchanged the spot throughout the 20-lap race. At the white flag, Malcuit held the lead and was able to fend off the challenge from Harvick to cross the line ahead for his first series victory. Augustus Toniolo (RPG / Kosmic) was a close third, ahead of Alessandro Truchot (Parolin USA) and Ethan Tovo (Nitro Kart).

Tomorrow is a repeat of Saturday, with Round Two contest around the Ocala Gran Prix for the United States Pro Kart Series. Be sure to listen LIVE at ekartingnews.com/live and follow updates on the EKN social media channels.