A total of 273 entries competed on the opening day of the Heartland Grand Prix for the 2021 United States Pro Kart Series presented by MG Tires. All seven categories battle each other, the ‘Backwards 1’ layout and strong winds throughout the day at the New Castle Motorsports Park in New Castle, Indiana. The skies were blue and the sun was shining, but the winds were strong all day – similar to Friday – this time coming from the south. It kept the warm jackets on everyone watching the qualifying, Prefinal and Final sessions to complete Round Three of this year’s championship chase.

The Franklin Motorsports X30 Pro division welcomed the third different winner on the season. Two drivers who have dominated the category throughout the last five years were 1-2 in qualifying with four-time SKUSA Pro Tour champion Ryan Norberg (RPG / Kosmic) setting fast time just ahead of four-time defending USPKS champion Brandon Jarsocrak (MDR / Kosmic). They held their position through the Prefinal to start the main event from the front row. Norberg got the jump on Jarsocrak, and looked to settle in for a 16-lap battle. Jarsocrak came under pressure while in second on lap three, and contact with him and Branyon Tiner (RPG / Kosmic) allowed Norberg to pull away. That contact shuffled up the field behind them and eventually, Hannah Greenemeier (RPG / Kosmic) was in the second spot. Fast laps of the race allowed her to cut into the lead Norberg established, and by lap 12 was on his bumper. She took the lead on lap 13, before Norberg retook the position two laps later on the penultimate lap. A defensive line around the 1.2-mile course paid off, with Norberg holding off Greenemeier at the line by 85 thousandths of a second. Connor Zilisch (Nitro / Redspeed) closed on the final circuit to finish a close third. Pauly Massimino (MDR / Kosmic) was fourth with Brit Oliver Hodgson (J3 / CompKart) in fifth. 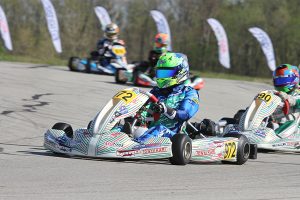 The fight in the Mike Doty Racing KA100 Senior class looked to be a three driver fight and became a gaggle of karts at the end. Round One winner Connor Zilisch (Nitro / Tony Kart) led the majority of the race with Prefinal winner Hayden Jones (Nitro / Redspeed), AJ Myers (Magik Kart) and Aiden Levy (TF / Tony Kart) in the lead group. Both Myers and Levy led at one point but Zilisch would return to the lead each time. A wild final circuit behind Zilisch gave him enough room to cross the line for a second victory on the season. Myers drove from fourth to second on the final circuit, with Jones ending up third. Defending champion Brandon Lemke (FMS / Merlin) came up to fourth on the final lap with Nolan Allison (RPG / Kosmic) completing the top-five. 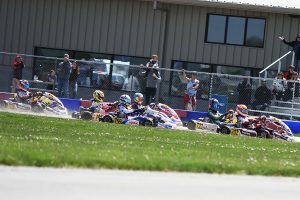 First on the order of the day was the Rolison Performance Group X30 Junior class. It came down to an exciting last lap battle with a lead of four growing to nearly the entire top-10. Prefinal winner Jack Jeffers (SCR / Redspeed) was the lead for the majority of the 16-lap race with top qualifier Logan Toke (RPM / Tony Kart), Max Garcia (AKT / Will Power Kart) and Caleb Gafrarar (PSL / Birel ART) in the mix. Contact dropped Toke down the order on the final circuit and allowed more drivers to join in the mix in the closing laps. About seven drivers navigated the final corners all shuffling for a chance at the top spot. At the line, Jeffers crossed the line first Ayden Ingratta (SCR / Redspeed) climbing from seventh to second on the last lap. A two-position penalty to Jeffers took him off the top of the podium, giving the win Ingratta for his first at the series. Garcia was classified second with Jeffers in third. Round One winner Jeremy Fletcher (TF / Tony Kart) moved up six spots to fourth with Paul Bocuse (Parolin USA) in fifth. 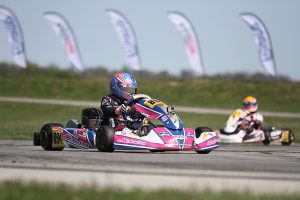 A three-driver breakaway made up the Final for the Timmy Tech KA100 Junior class. Prefinal winner Chase Hand (RPG / Kosmic), Jack Jeffers (SCR / Redspeed) and Oliver Wheldon (JC / Kosmic) made up the fight. Wheldon had a solid lead early until he was run down by the other two. All three took a turn at the point, with the last lap deciding who was there at the checkered. Wheldon held the lead at the white flag with Hand trying to work past Jeffers at the ‘scoreboard’ corner. Contact was made and Hand spun around, providing Wheldon with the space to cruise to the checkered flag for his first series victory. Jeffers continued on to second with Helio Meza (IRM / Tony Kart) in third ahead of Cooper Shipman (IRM / Tony Kart). Noah Baker (Supertune / Tony Kart) completed the top-five with Hand able to cross the line in sixth. 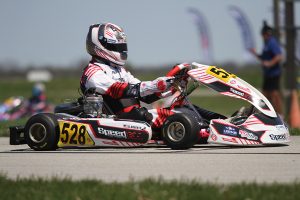 Former series champion David Galownia (Timmy Tech / CompKart) was utilizing the home track advantage in the Speed Concepts Racing X30 Masters class. He set fast time in qualifying and won the Prefinal, but Round One winner Mario Barrios (RPG / Kosmic) was quick on the opening lap of the Final to jump out to the lead. Galownia was pressured by Renato Jader David (Orsolon / Tony Kart) on lap two, and they made contact. Both spun off the track and took themselves out of competition. Barrios had a solid lead early due to the contact behind him, but a group of drivers were able to run him down. Derek Wang (Crosslink / Exprit) began the fight with two laps remaining, but was shuffled back with Scott Roberts (SCR / Redspeed) coming through for the top position. Roberts was able to fight off the contenders to reach the checkered flag first, ahead of Barrios. Wang ended up third with Laurentiu Mardan (TecnoKart USA) in fourth. The drive of the day went to Miguel Mier (Crosslink / Exprit), who came from 26th on the grid in the Prefinal following for issues in qualifying, driving his way up through the 10-laps of the heat and 14-lap main event to finish fifth. 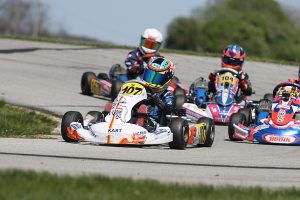 The Trinity Karting Group Mini Swift class went down to the wire, similar to the two Finals in Ocala. A number of different lead changes took place with the lead pack mostly four driver until the end when it became three. Round One winner Enzo Vidmontiene (Benik) was leading at the white flag, but was shuffled back to third as they went through the Monza. Kai Johnson (AKT / Kart Republic) took over the top spot until Prefinal winner Oliver Wheldon (JC / Kosmic) got around him at the Blue corner. Wheldon went defensive in the final corners but left just enough room on the exit of the penultimate lap for Johnson to dive inside. Johnson would drive to the checkered flag first, picking up his first series victory with Wheldon second and Vidmontiene in third. Asher Ochstein (Benik) won the battle for fourth, picking up seven positions while John Antonino (Race Factory) came from 17th to fifth in the 14-lap Final. 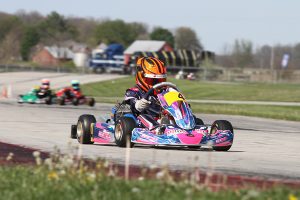 Augustus Toniolo (RPG / Kosmic) dominated the day in the Team Ferris Racing Micro Swift class. Toniolo swept the action on the day, setting fast time in qualifying and winning the Prefinal and Final. He drove away from the field in the Final, pulling out to a 2.5-second advantage after 14 laps, becoming the third different winner on the year. Round Two winner Keelan Harvick (Nitro Kart) won the fight for second ahead of Ethan Tovo (Nitro Kart). Caleb Tarter (Nitro Kart) drove to fourth ahead of Brady Schad (Nitro Kart).

Sunday brings Round Four of the 2021 United States Pro Kart Series at the Heartland Grand Prix as the near record number competitors take on the New Castle Motorsports Park for one more day.