The United States Pro Kart Series presented by MG Tires completed the third event of the 2021 season with the Badger State Grand Prix at the CTECH Manufacturing Motorplex at Road America. The wind picked up and stayed throughout Sunday at the Elkhart Lake, Wisconsin facility, and thankfully, no rain drop all weekend long. Intense and very competitive racing all weekend long in the seven IAME categories, making up 254 entries. Four of the seven winners from Saturday were able to repeat on Sunday to highlight the Round Six action.

Ryan Norberg (RPG / Kosmic) put in a stellar performance on Saturday in X30 Pro with a clean sweep on the day. Two-time race winner Connor Zilisch (Nitro / Tony Kart) took top honors in qualifying with a 45.939-lap. Zilisch led on the opening lap of the Prefinal before Norberg took over and led the remainder of the 16-lap race. With the pole position in hand, Norberg was able to get away early in the 22-lap Final as they fought for second behind him. Once Zilisch gained control of the spot, Norberb established a solid lead that would not diminish. At the checkered, Norberg was 1.4 seconds ahead of Zilisch, and take home a $5,000 payday for the weekend purse. Two runner-up results for Zilisch gave him $2,500 on the weekend. One of the quickest drivers all weekend was four-time champion Brandon Jarsocrak (MDR / Kosmic). A DNF in Prefinal on Saturday forced him to drive up through the field from 30th to 10th. Today, he was shuffled back to fifth at one time, but drove up to third for his first podium finish. Nate Cicero (RPG / Kosmic) stole the fast lap honors and was able to work by Branyon Tiner (RPG / Kosmic) for the fourth spot. That earned him the P3 check, worth $1,250. 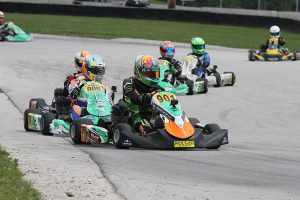 The KA100 Senior division was swept by defending champion Brandon Lemke (FMS / Merlin), but not without a fight. Lemke set fast time in qualifying and led every lap of the Prefinal. Saturday winner Connor Zilisch (Nitro / Tony Kart) jumped out to the lead, and that began a shuffle for the lead. After they went back and forth, Arias Deukmedjian (Trinity / Kart Republic) slipped ahead of both, and led for eight circuits until Lemke moved back to P1. This time, Lemke would hold the top spot all the way to the checkered flag as they fought for position behind him. Lemke scored his first victory of the season. Jace Park (Trinity / Kart Republic) was able to fight forward in the closing laps to second, dropping Deukmedjian to third and Zilisch to fourth. Hayden Jones (Nitro / Redspeed) was a close fifth. 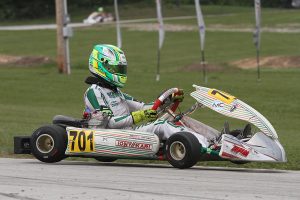 Carson Morgan made it a perfect sweep in the X30 Junior category to take home the $2,500. Morgan (RPM / Tony Kart) controlled the top spot all day again, this time with a little pressure from Justin Adakonis (MDR / Kosmic). With quick laps of the race, Adakonis closed up on Morgan and with three laps to go, made a charge in the last corner. Morgan held him off and then again into turn one, with a slight bobble by Adakonis allowing Carson to get away. Morgan went on to earn his second victory in the class. Adakonis held off a charging pack for second, ahead of Ayden Ingratta (SCR / Redspeed), Cameron Weinberg (MDR / Kosmic) and Parker DeLong (RPM / Tony Kart). Ingratta took home $1,500 for second on the weekend with Adakonis a $750 check. 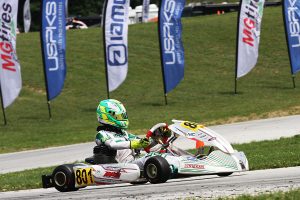 Morgan (RPM / Tony Kart) took the broom to the entire Junior field on the weekend, also sweeping the KA100 Junior division. Morgan had to fight off some challenges in the Prefinal before he would walk away to a 5.938 advantage after 22 laps. The fight was for second with Jeremy Fletcher (TF / Tony Kart) winning that battle ahead of Parker DeLong (RPM / Tony Kart). Helio Meza (IRM / Tony Kart) secured fourth while a four-wide drag race for fifth ended with Chase Hand (RPG / Kosmic) earning the spot. 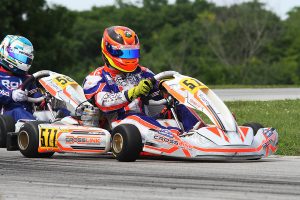 The X30 Masters category went down to the final corner, welcoming the fifth different winner in six rounds. Saturday winner Renato Jader David (Orsolon / Tony Kart) was able to secure the fast time in qualifying, but slipped back at the start. Cristian Vomir (TecnoKart USA) took over the point and lead the first half. That was until contact between he and Renato for the lead ended with both off track. That allowed defending champion Scott Kopp (FMS / Exprit) to take over the lead and scored the win. At the start of the Final, last year’s race winner Scott Roberts (SCR / Redspeed) jumped out to the lead. It was short lived with point leader Mario Barrios (RPG / Kosmic) claiming the spot. He would lead a majority of the race with Kopp on his bumper. Kopp took over the lead on lap 17 before Barrios returned to the spot prior to taking the white flag. Kopp closed back up on Barrios entering the final corner, and made a move on the inside. The two made contact, and pushed wide as Kopp spun on top of Barrios. That allowed Miguel Mier (Crosslink / Exprit) to dive past to lead the only lap that counted, reaching the checkered flag first. Teammate Derek Wang (Crosslink / Exprit) crossed past as well. Kopp was able to recover to cross the line in third ahead of Roberts with Barrios restarting to finish fifth. 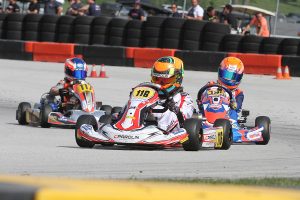 It was a near complete sweep on the weekend for Matias Orjuela (Parolin USA) in the Mini Swift category. Enzo Vidmontiene (Benik) cut the sweep with fast time in qualifying before Orjuela came through for the Prefinal win. The two went back and forth in the Final, as Oscar Iliffe (IRM / Tony Kart) made it a three driver fight for the victory. Iliffe got in between the two with two laps to go. Their fighting for second gave Orjuela enough breathing room to hold the top spot all the way to the checkered flag for a second victory. Iliffe held on to second with Vidmontiene in third, posting fast lap of the race. Vivek Kanthan (MDR / Kosmic) put in a drive of his own, up 12 spots to fourth with Cash Perkins (FMS / Merlin) placing fifth. 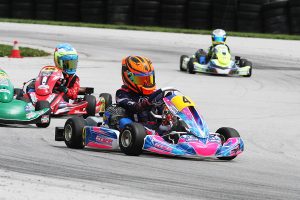 The Micro Swift class was cut short to 11 laps due to a red flag. A great three driver fight was occurring with Saturday winner Keelan Harvick (Nitro Kart), Augustus Toniolo (RPG / Kosmic) and Ethan Tovo (Nitro Kart). When the red flag came out, Toniolo was leading on the last completed lap, earning his third victory on the season. Harvick was classified second with Tovo in third. Lucas Palacio (CompKart) drove up to fourth with Jackson Gibson (RPG / Kosmic) placing fifth.

Three months until the series final, scheduled for October 14-17 with the Carolina State Grand Prix at the GoPro Motorplex in Mooresville, North Carolina.