The final day of the United States Pro Kart Series Hoosier State Grand Prix ended with unique circumstances. From Thursday through the lunch hour Sunday at the New Castle Motorsports Park, the weather was clear skies and warm temperatures. When the main events began, clouds rolled over the New Castle, Indiana facility with storms to the west and north. Three feature races ran without weather issues but the threat continued to increase. The skies opened up finally with the fifth of seven races, including a delay for changes and lightning in the area. Racing resumed after roughly an hour break, deciding the final winners of the day. Three drivers doubled up on the win column for the weekend while others grabbed their first of the 2020 season.

The final race of the day was the X30 Pro division, which took to a wet but perceived drying track as the threat of rain continued when the green flag waved. While rain never came, the track remained wet enough for rain tires throughout the shortened 16-lap race. Senior rookie Bryson Morris (RPG / Kosmic) started on the pole position after winning the Prefinal ahead of California’s Jake Drew (J3 / CompKart). It would be Pauly Massimino (MDR / Kosmic) up to the lead from P3 early on and setting a strong pace as they shuffled for the second spot. Eventually, it was veteran Phillip Arscott (KSNA / Will Power Kart) that charged forward from the P9 starting spot. Arscott was into second by lap three, and ran down Massimino. A move at the scoreboard corner was the deciding factor on lap seven as Arscott led the remainder of the race to earn his first series victory. Massimino kept it close, unable to make a charge at retaking the lead to finish second. Morris, who nearly missed the start of the race after issues with his starter, fought off the top two of the EKN TaG Driver Rankings in Ryan Norberg (RPG / Kosmic) and Brandon Jarsocrak (MDR / Kosmic). Norberg, who set fast time in qualifying, was shuffled back to sixth by the checkered flag with Jarsocrak fourth and Edward Portz (RPG / Kosmic) in fifth. Arscott earned the $5,000 payday as the weekend winner, which counted points from only the two main events. Jarsocrak was second, earning $2,500 with Massimino in third for $1,250. Norberg and Saturday winner Arias Deukmedjian (KSNA / Will Power Kart) completed the weekend podium, taking home $750 and $500. 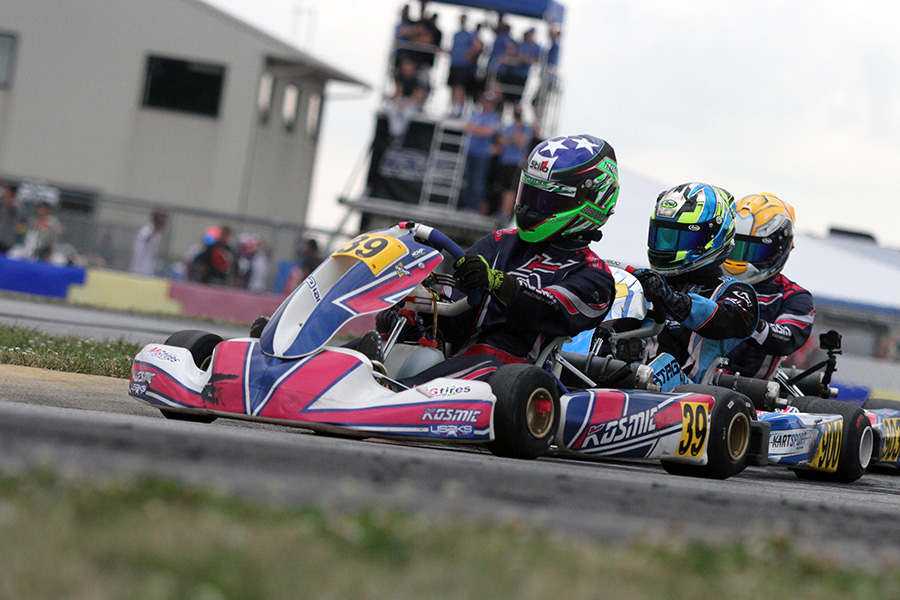 Morris, one of six drivers pulling the double duty effort on the weekend, was able to grab that top spot of the podium in the KA100 Senior class. The RPG / Kosmic driver started P2, alongside Prefinal winner Alex Bertagnoli (KSNA / Kart Republic). After Morris led the opening two circuits, Bertagnoli took control of the point. They pulled away to a small gap over the rest of the field while the fight for third took place. Luke Selliken (RPG / Kosmic) came alive on Sunday, coming from P14 in qualifying to fifth in the Prefinal. He eventually seized the third spot and began running down the top-two. The race for the victory was a three driver battle late. Morris moved to the lead on lap 13 with Selliken into second with two laps to go. It came down to a drag race to the line for the victory with Morris getting the edge by 27 thousandths for his first series victory. Selliken settled for second with Bertagnoli in third, posting fast lap of the race. Matthew Mockabee (MDR / Tony Kart) was fourth with Hayden Jones (Nitro / Tony Kart) fifth, putting four double duty drivers into the top-five. 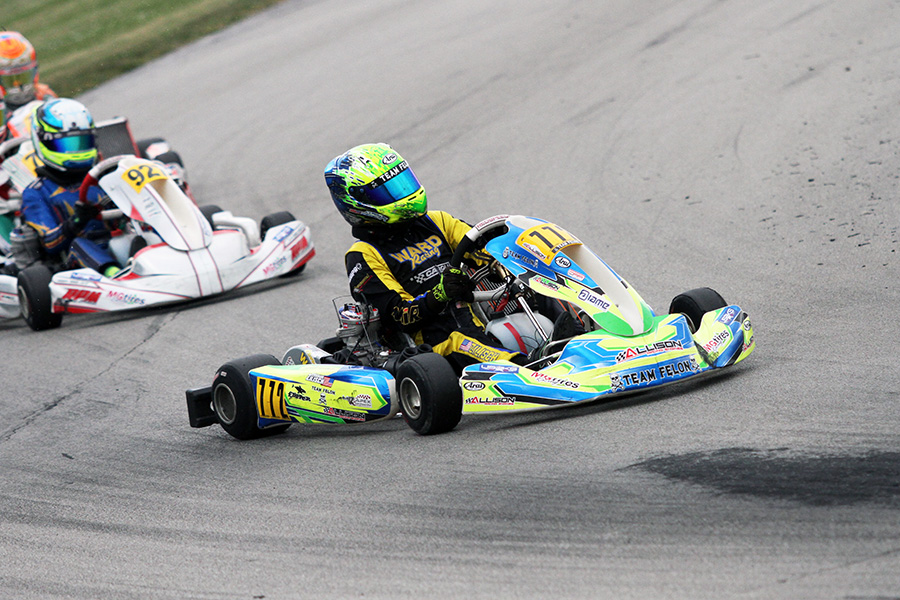 The first double winner of the weekend, and rain drops, came in the X30 Junior division. Connor Zilisch (LAK / Redspeed) started on the pole position for the main event after holding off Max Opalski (RPM / Tony Kart) at the line by 96 thousandths. A lot of shuffling took place early, and around lap eight of the Final when rain drops hit the track, making certain areas of the 1-mile course damp. It caught some of the drivers off-guard, with contact mixing up the order. Once the rain stopped, the field settled down and Zilisch regained the top spot. Josh Pierson (RPG / Kosmic), who started 19th, used the damp track to his advantage, making up multiple positions and gaining ground on the leaders. When Zilisch moved to the lead, Pierson worked himself up to second with Paul Bocuse (SCR / Redspeed) in third. The order remained unchanged to the finish as Zilisch held off a late move by Pierson for the victory by 15 thousandths. Bocuse was a close third with Opalski fourth and Jace Park (SCR / Redspeed) fifth. Zilisch came away with the big check for the weekend purse with Pierson, Alex Stanfield (Crosslink / Exprit) and Justin Adakonis (MDR / Kosmic) completing the money podium. 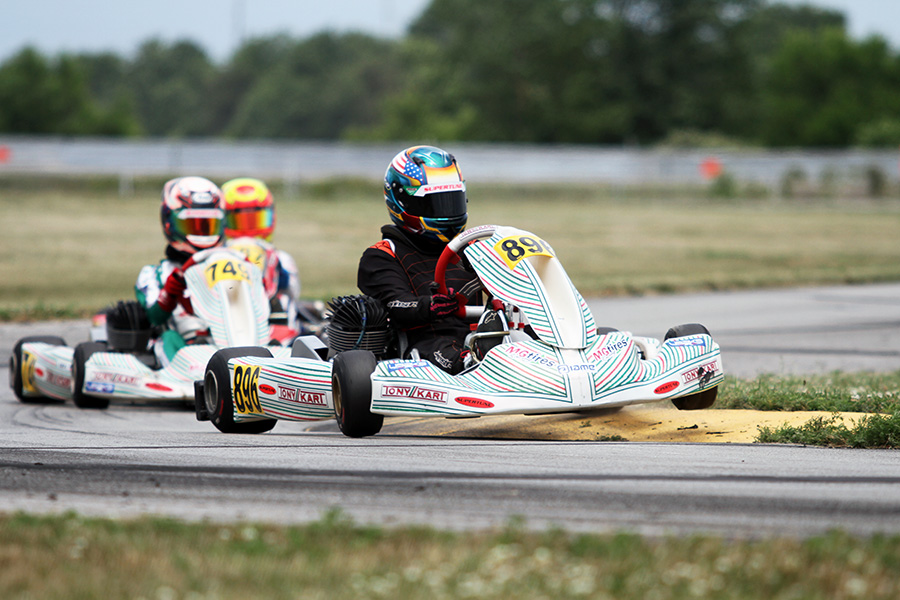 Mateo Rubio Luengo (Supertune / Tony Kart) was able to redeem himself in the KA100 Junior class on Sunday. The driver from Georgia was the provisional winner on Saturday until a bumper penalty took the victory and podium away. Mateo qualified fourth and finished fifth in the Prefinal where Saturday winner Logan Adams (Comet / Kosmic) won the race. Adams was shuffled back early in the Final as Mateo and John Burke (Supertune / Tony Kart) hooked up. Junior rookie Cameron Weinberg (Nitro / Kosmic) attempted to keep up with the teammates and posted fast lap of the race but fell off the draft late in the race. Mateo and Burke ran nose-to-tail to the checkered flag for a provisional 1-2 finish. Burke would be removed from the results following tech, and Weinberg had third taken away, given a two spot penalty for pushback bumper. This advanced Brent Crews (KSNA / Will Power Kart) up to second and last year’s Mini Swift champion Christian Miles (KSNA / Kart Republic) to third. Weinberg was classified fourth with top qualifier Connor Zilisch (LAK / Redspeed) in fifth. 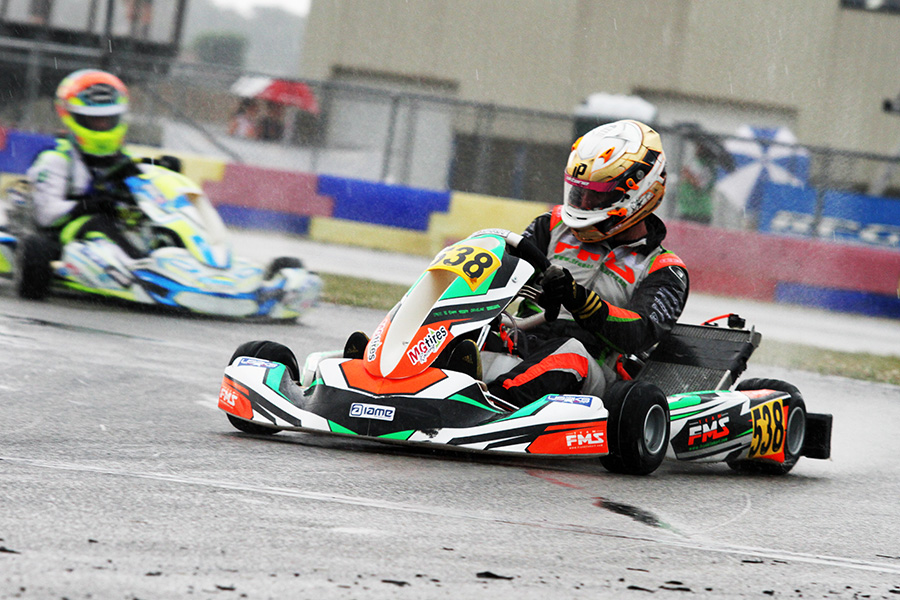 The X30 Masters group had nearly the toughest time today as they were caught out by the weather twice. Their main event began in dry conditions before a roughly 2-minute shower drenched the track. After a wreck that included roughly half the field at I-70 corner, officials threw the red flag. Defending champion David Galownia (CompKart) had everything on his side until the red flag. The Kentucky driver had fast lap in qualifying, won the Prefinal and jumped out to a sizable lead in the opening two laps of the Final. That was eliminated by the red flag. Officials gave the field 15-minutes to change over as the race was now declared driver’s choice in terms of tires. During that down time, a strong cell came over the track and continued to pour when their race resumed. Saturday winner Scott Kopp (Franklin / Exprit) took over the lead and led the shortened main event as lightning in the area forced the checkered flag to be waved early with the race past the halfway point. Galownia had to settle for second with Danny Robertson (RPG / Kosmic) completing the podium in third. 2018 champion Laurentiu Mardan (Tecno) had fast lap of the race, driving up from ninth to fourth while Alex Mueller (CompKart) finished fifth. 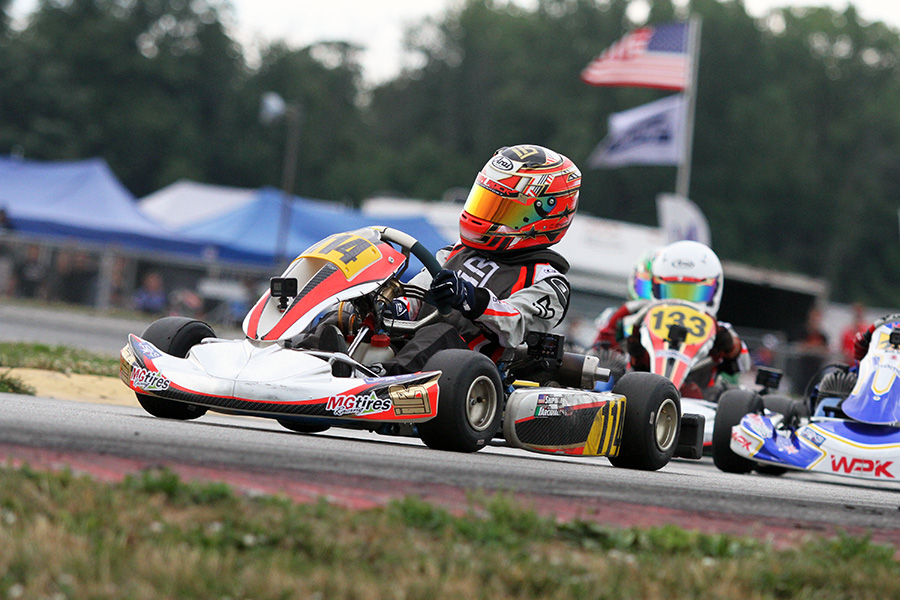 Mini Swift was a battle from the beginning to the end on Sunday. Salim Hanna (Team Montoya / Tony Kart) set the fast time in qualifying, edging out Max Garcia (KSNA / Will Power Kart) and Saturday winner Matias Orjuela (Parolin) as all three were with in 99 thousandths of one another. Garcia won the 10-lap battle in the Prefinal over Orjuela with Cooper Shipman (IRM / FA Kart) up to third from P6. Shipman was shuffled back outside the top-five early in the 14-lap Final as Garcia led early. Cameron Brinkman (Franklin / Merlin) started fourth and eventually took over the lead. He jumped out to a sizable lead but was run down by Shipman, who led a train of drivers that included Garcia. The Florida driver took over the point and led as they received the white flag. As they shuffled for position, Orjuela was able to close in and make a bid for the victory. He and Shipman drag raced to the checkered flag with the margin only 63 thousandths. Shipman crossed the line first, earning his first series victory. Orjuela had fast time in his runner-up finish with Garcia holding on for the third spot on the podium. Brinkman finished fourth with Parker DeLong (Syntech / Tony Kart) in fifth. 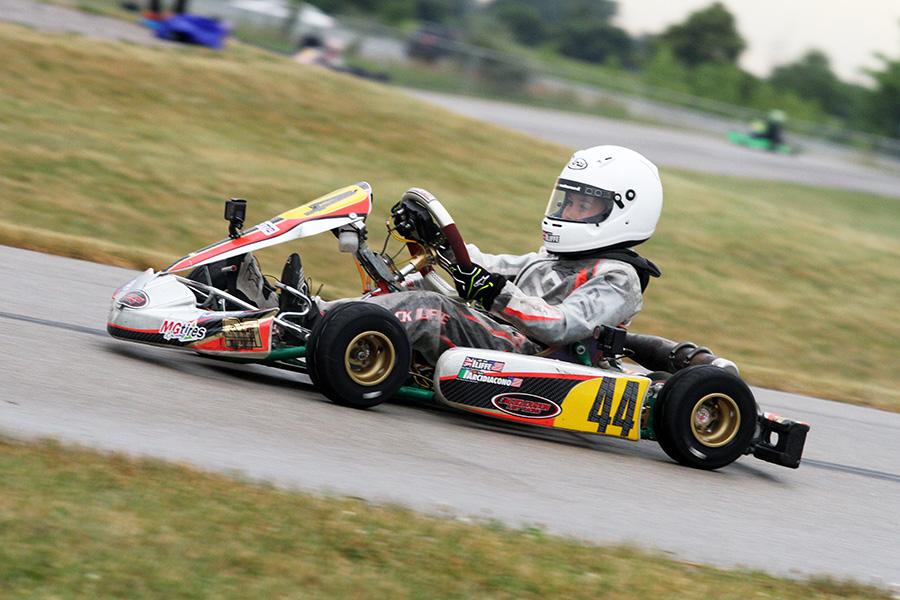 The Micro Swift category had a day full of drama. It began with Carson Weinberg (Nitro Kart) grabbing the fast time in qualifying by only one thousandths of a second over Sarah Bradley (Nitro Kart). Weinberg started the Prefinal from the tail of the field due to an engine change, and Bradley took control of that race. That was until the halfway point when she retired coming out of the ‘Scoreboard’ corner. Saturday winner Jack Iliffe (Tony Kart) took over until Saturday podium finisher Vivek Kanthan (Kosmic) grabbed the lead and scored the win. Micro was the first class to hit the track after the lightning delay, going out on the rain tires. Kanthan was unable to make it through the I-70 corner on the opening lap, spending the 12-lap race on the sidelines. Iliffe would go on to a wire-to-wire victory, driving away to a 20-second advantage. Caleb Tarter (Nitro Kart) was unable to start at the Prefinal, and came from 17th on the grid to the second spot on the podium. Jase Petty (Kart Republic) advance up to third from ninth to complete the podium. Asher Ochstein (Benik) won the battle for fourth over Sam Tutwiler (Nitro Kart), who would receive a pushback bumper penalty and moved to seventh in the final standings, moving Cade Jaeger (Nitro Kart) to fifth.

The United States Pro Kart Series will take the month of August off before returning on a special Labor Day weekend event at one of the most historic facilities in the USA. The CTECH Manufacturing Motorplex at Road America will host Rounds Three and Four on September 3-6 in Elkhart Lake, Wisconsin.