The 2019 United States Pro Kart Series presented by MG Tires begins this weekend with running of the Southern Grand Prix at the Ocala Gran Prix facility. The Ocala, Florida circuit launches the seventh season of the IAME program with seven categories filled by 150 entries set to do battle and start the chase toward the championships, which bodes an $80,000 prize package on the year. The 6/10-mile course is very similar to a bull-ring or NASCAR Bristol course. Close contact with very little time to relax make the racing very exciting, and with the large fields will be very intense throughout the weekend.

eKartingNews.com is back for the seventh year with United States Pro Kart Series to provide industry-leading coverage from each of the three events for the 2019 season. Those karting enthusiasts not in attendance can listen from home or on the road to the NEW EKN Live 2 broadcast page at www.ekartingnews.com/live2 with Tim Koyen providing the play-by-play call. Daily reports and updates on the EKN Social Media network will fill up your timeline throughout the weekend. 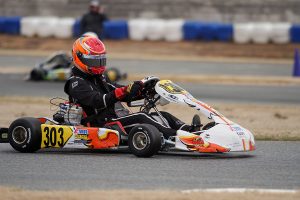 The two drivers to win in 2018 are back for more in 2019 in the X30 Pro division. Brandon Jarsocrak won five of the six races, claiming his second straight USPKS title. The KartSport North America / Kart Republic driver remains one of the top drivers on the east coast, looking to begin his run at three-straight with wins in Ocala. Austin Garrison won the opening round in Ocala last year, having a win taken away on Day 2 due to a pushback bumper. Garrison finished the season as runner-up in the standings to Jarsocrak, and now is part of the CRG Nordam operation as they make a push in USPKS competition. Garrison is joined by Brenden Baker, as the Texan joins Garrison in a bid to score wins and podiums in 2019. This year’s field is deep, increasing from 21 to 29, with more expected to enter trackside. Senior rookies and returning drivers from year’s past are among the many that will battle for positions on the podium, including 2018 KA100 Senior champion Zach Hollingshead (TB Kart).

With Hollingshead and 2018 vice-champion TJ Koyen moving over to X30, that has opened up the door for a new champion in the KA100 Senior division. Eyes turn to third-place finisher Colton Ramsey (Innovative / Exprit) and fourth-place Josh Hotz (Franklin / Merlin) as the possible successors. Ramsey won the final round of 2018 for his first USPKS victory while Hotz is the defending ‘Throwdown’ king in KA100 competition in the Midwest. The class has surpassed the 20-driver mark for the opener, with a number of drivers vying to be among those fighting for podium and victories. 2018 WKA champion Blake Hunt is moving over to the DR Kart for the first time, SKUSA Winter Series champion Julia Boos (Kosmic) is throwing her name in the hat, and Arie Venberg (Franklin / Kosmic) is coming off her first WKA victory at GoPro last weekend. 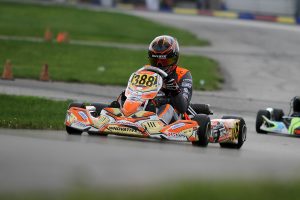 Last year’s X30 Junior class was not well attended in Ocala, and steadily grew as the season went on. Zero winners from last year are returning, while defending champion Nicholas Terlecki (Franklin / Merlin) has a tall task to repeat as the title winner in 2019. The field is stacked with talent, including Connor Zilisch (LAK / Tony Kart) and Brent Crews (KSNA / Kart Republic). The duo are coming off victories at the WKA event last weekend, along with rising star Chloe Chambers (MDR / Kosmic). Speed Concepts Racing / Tony Kart won three of the six races in the category last year, and come into the weekend with Noah Baker, Luke Lange, Kyffin Simpson, Paul Bocuse and new driver Jace Park. CRG Nordam is another powerhouse team set for a run at the championships with Matthew Christensen, William Cox and Joey Antanasio.

Many of the Junior drivers are pulling double duty on the weekend, running the KA100 Junior division. Zilisch, Crews and Simpson are among those doing both categories, same with Christensen and Cox with CRG. The crown however lies with Jacob Graham (Nitro Kart), who won twice in 2018 to claim the championship. He along with Donald Whorton II (Nitro Kart), Erikson Evans (Kosmic) and Spencer Lofton (Tony Kart) are among the returning top drivers from last season. 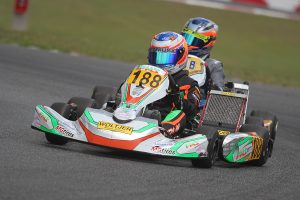 The most competitive category throughout 2018 was the return of X30 Masters. Four race winners return for 2019, including champion Laurentiu Mardan (Tecno). Mardan won both the title on one victory and four podium finishes over the six rounds of the season. He along with Scott Roberts (SCR / Tony Kart) were the class of the field. Roberts won two of the races last year, missing out on the crown due to two DNFs at the opener in Ocala. Todd Shambo (CompKart) won in Ocala last year, and Darin Marcus (Fullerton) won at the finale, completing the four drivers who won in 2018 returning this year. Add in Scott Kopp (Innovative / Exprit), young driver Logan Cozzie (CompKart), John Roicheaux (Kosmic), Cristian Vomir (Tecno), and others fighting for podium spots on the weekend.

Kai Sorensen helps continue the run of defending champions returning to the USPKS for the 2019 season. Sorensen (Supertune / Tony Kart) came out the title winner in Mini Swift in 2018, without earning a victory. Six different drivers won in 2018, yet Sorensen went winless in the six rounds but earned the most points to win the championship. 2019 is a different story, with Sorensen winning the SKUSA Winter Series and Florida Winter Tour titles this winter. Christian Miles (KSNA / Kart Republic) is the lone race winner returning in 2019, coming off a sweep of the Daytona KartWeek in December. Kart Republic has a strong contingent with SKUSA Pro Tour champion Max Garcia and Danny Dyszelski. Nitro Kart won three times in the class, with 2018 Micro Swift champion Ben Maier among those under the tent this weekend. Add in Parker DeLong, Cameron Weinberg and Nick Daniell. CRG has a strong roster with SKUSA Pro Tour champion Elliott Cox joining Texan Max Hewitt in Ocala. Watch for Anderson Leonard (Supertune / Tony Kart) and Miguel Costa (Parolin) to challenge as well. 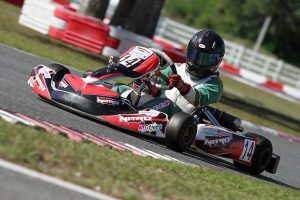 The 2019 season for Micro Swift is about new stars rising up. Many of the top drivers from have graduated up to Mini, leaving room for new names to contend for wins and podium positions. Spencer Conrad (Nitro Kart) is among the notables to fill that void, winning in WKA competition last weekend at GoPro. Aryton Grim (Nitro Kart) is another who won last weekend along with Ethan Thomsason (Parolin) scoring double victories at the Texas ProKart Challenge. The future bodes bright with 19 drivers registered for the category.