The 2018 United States Pro Kart Series is into the second part of the season. The Carolina Grand Prix completed today at the GoPro Motorplex with another hot day in the Mooresville, North Carolina area. The heat index nearly reached 100 degrees with the fourth round of the championship program – presented by MG Tires and Nitro Kart – contested at the popular ‘Race City USA’ facility. The seven IAME categories provided some exciting racing on the day, highlighted by four double winners on the weekend. 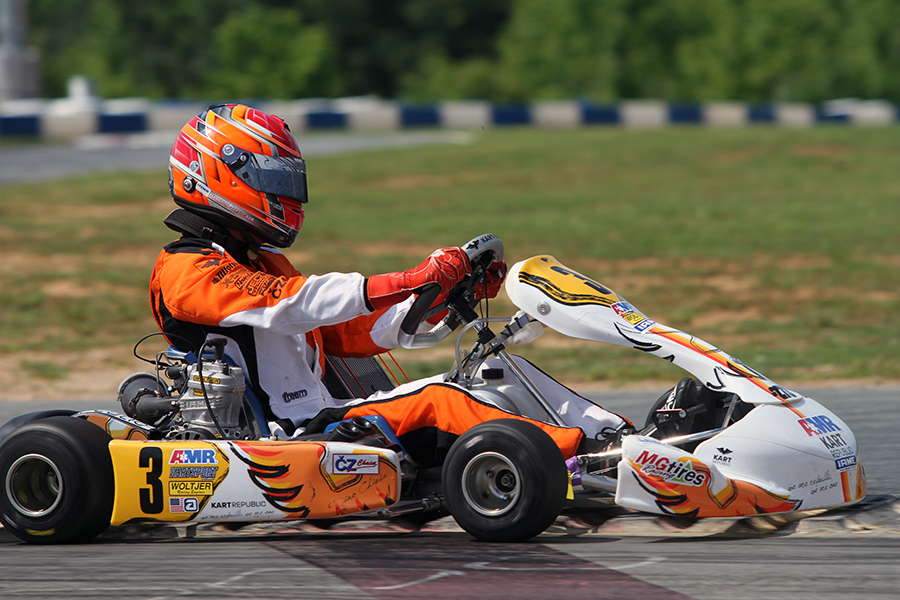 Brandon Jarsocrak was in another zip code throughout the weekend in the IAME Pro category to earn a perfect score on the weekend. Jarsocrak set fast time in qualifying, led all the laps in the Prefinal and nearly the entire distance of the Final. The KSNA / Kart Republic driver came under attack from teammate Jake Donald and Austin Schaff. For a brief instance, Schaff held the lead on lap two. Jarsocrak struck back before the line and then Donald went after the Senior rookie at turn one. The two made slight contact, enough to slow them down, allowing Jarsocrak to pull away and the field behind them catch up. Schaff dropped outside the top-five while Donald held the second spot until Colin Neal (Kosmic) took over. A long group of drivers behind him continued to mix it up with Schaff able to climb back up to second before a charging Austin Garrison (Fullerton) took the position. The Ocala race winner started 29th after contact with Scott Speed (Tony Kart) bent up his front end, dropping him out of the Prefinal after one lap. Garrison was fast, but not enough to close the big lead Jarsocrak established. At the line, Jarsocrak earned his second victory of the weekend by five seconds. Garrison crossed the line second, however, suffered a pushback nose penalty of two positions to drop him from second to fourth. That moved Schaff to second with Alex Bertagnoli (Kart Republic) another hard charger, up from 23rd and giving Franklin Motorsports Team FMS two drivers on the podium. Fellow Ocala winner Zach Hollingshead (Tony Kart) had the track figured out by Sunday, placing fifth. 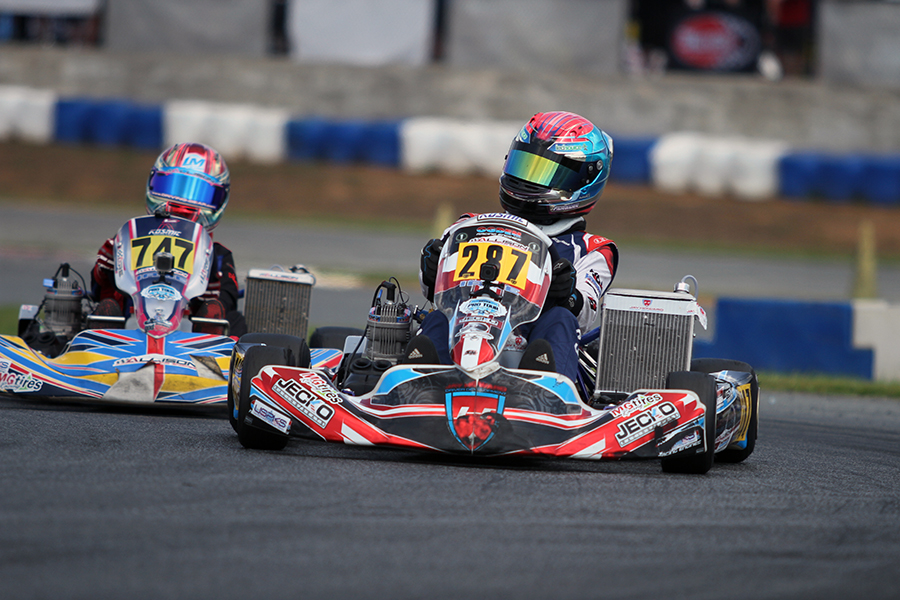 The magic did not flame out for veteran TJ Koyen in the KA100 Senior, as the longtime series competitor who earned his first career victory at the program on Saturday duplicated the feat on Sunday. Koyen qualified eighth in the morning session against a stout 22-driver field with Senior rookie Emory Lyda (Merlin) setting fast time. The lead group was well over 10 drivers early in the Prefinal until contact shuffled up the order. Koyen took advantage to move into the top-three and eventually the race win. From the pole position, Koyen laid down consistent laps in his Innovative / Exprit to remain out front unchallenged, leading by 1.3 seconds at the checkered flag. Lyda finished third in the Prefinal but emerged as the top challenger, placing runner-up for his best career finish at USPKS. Mike McAndrews (Fullerton) came from 11th on the grid to place third for a second time on the weekend in his return to the series. Ocala double-winner Zach Hollingshead (Tony Kart) found his rhythm on Sunday, bouncing back from contact in the Prefinal. With fast laps of the Final, Hollingshead climbed up to finish fourth ahead of Cal Stewart (FA Kart), who jumped in on Sunday for a one-off run. 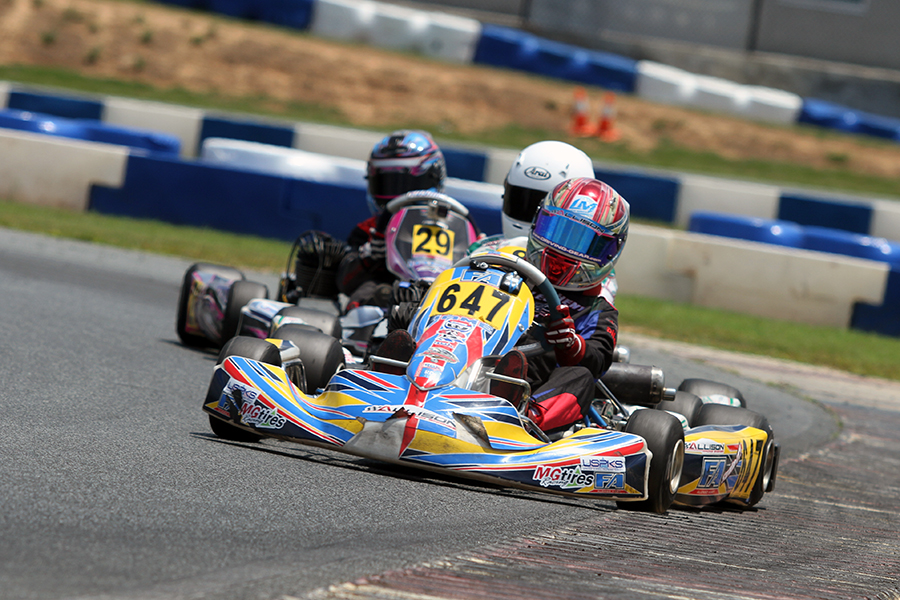 Jeremy Fairbairn (Kosmic) was the third driver to double up on the weekend, taking both wins in the IAME Junior division. Fairbairn was third after qualifying behind Luca Mars (Kosmic) and Canadian Justin Arseneau (Tony Kart). Contact on the opening lap of the Prefinal brought out a red flag as Arseneau made contact with a barrier and dropped to the ground in pain. A sprained wrist was the injury and the race restarted without him. Fairbairn was able to get away with the win in the Prefinal, securing pole position for the Final. A good group of drivers made up the lead pack in the Final with Fairbairn dropping down to fourth. Mars and Matthew Duncovich (Kart Republic) each took a turn at the point until Fairbairn retook the position on lap nine. Mars settled into second as the two were able to get away from the field. Meanwhile, Arseneau was fighting forward from 16th on the grid, posting fast laps of the race in the process. He eventually reached third and was able to work past Mars on the final circuit for the runner-up spot. Fairbairn went on to score the victory, his second of the weekend to match the total set by Tyler Gonzalez at Ocala. Duncovich ran to fourth with Caleb Bacon (Tony Kart) in fifth. 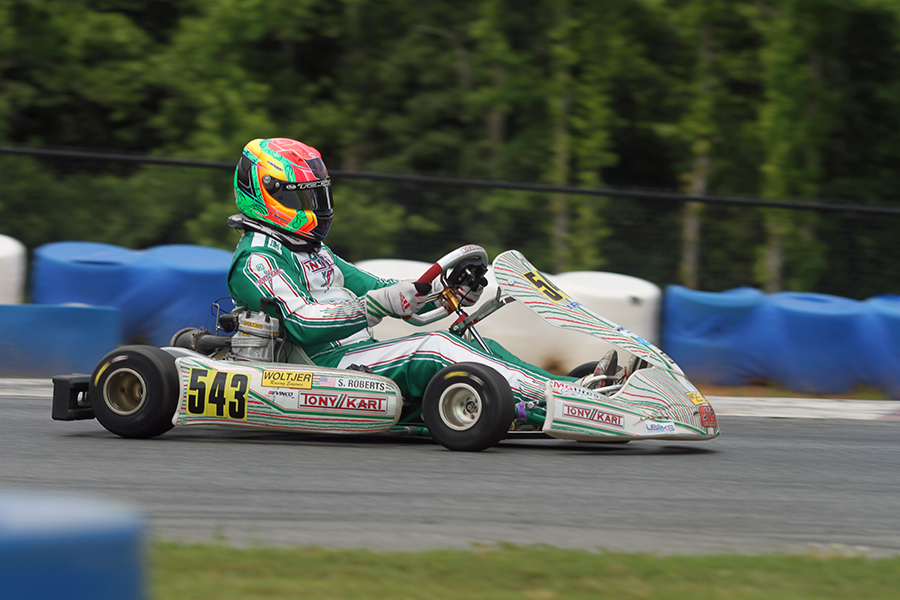 The Senior and Junior categories were won by four drivers, earning two wins a piece. Luca Mars doubled up in the KA100 Junior category. Mars made his first class start this weekend, winning Saturday and repeating on Sunday. Throughout the day, Mars was on top of the results sheet, however, the Final win was not without a battle. He was joined by Gray Leadbetter (Tony Kart) and Erikson Evans (Kosmic). Leadbetter led for some time until Mars took back the point. They swapped the lead in the final few laps, and on the final circuit Mars secured the top spot. Heading to the final corner, Leadbetter and Evans made contact to slide off at the entry of the corner. This gave Mars the clean path to the victory and the checkered flag. Brooke Nachtmann (Tony Kart) took advantage of the contact, completing a 13th to second triumph with Donald Whorton II (FA Kart) winning the race for third at the line over Jacob Graham (Exprit) and Westin Workman (CompKart).

Scott Roberts was able to avoid spinning drivers and mechanical issues to claim his first USPKS victory. Roberts (Tony Kart) qualified third as he was just 78 thousandths off of Saturday winner Laurentiu Mardan (Tecno) and John Robicheaux (Kosmic). Roberts was able to get away for the Prefinal win, and the pole position allowed him to break away early in the main event. Robicheaux jumped out to second early, however, was unable to keep pace with Roberts. The Florida driver won the main event by over seven seconds. Robicheaux continued losing his advantage for second and eventually retired with an issue. This gave the runner-up spot to Mardan. While all this was going on, Masters rookie Scott Kopp (Exprit) was making his way up the field from 16th one position at a time after a DNF in the Prefinal. Fast laps of the race mid-way, Kopp put himself into the top-five. He took over third briefly with Logan Cozzie (Top Kart) fighting back. The two battled to the end, with Cozzie reach the line first. A penalty for contact dropped Cozzie two positions to fifth, moving Kopp onto the podium with Todd Shambo (Kosmic) to fourth. 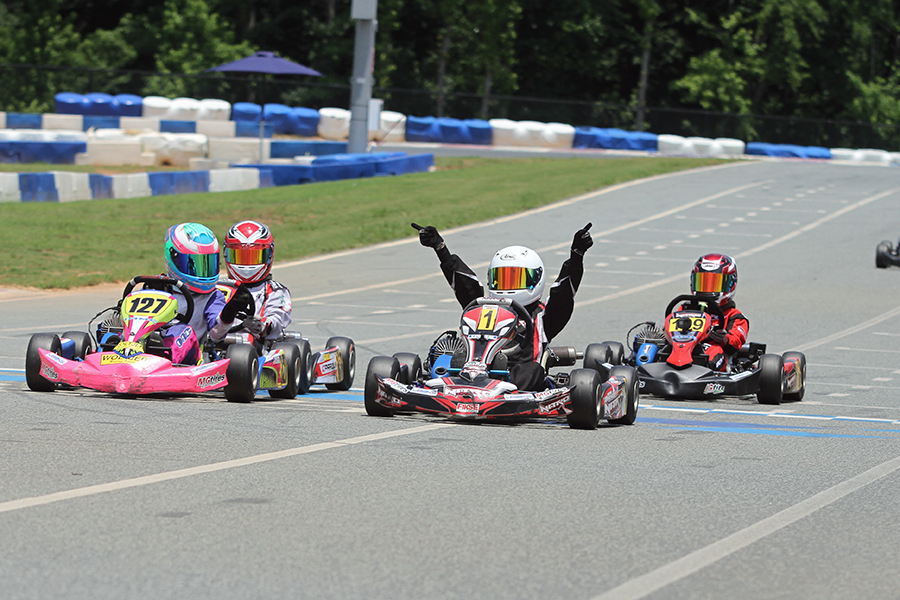 Adam Brickley made his first start in the Mini Swift category this weekend after beginning the season in Micro Swift. A podium on Saturday was improved to his first class victory on Sunday. Brickley (Energy) was quick in qualifying, just not enough for fast time with Miguel Costa (Benik) taking the pole position. He would get shuffled back in the Prefinal and eventually retire after contact. Up front, Brickley would go on to win that race with Jace Park (Parolin) in second. The top challenger early however would end up being Sam Corry (Kart Republic), up from fifth on the grid. The two swapped the a few times before Brickley had a strong hold on the spot. Saturday winner Sebastian Ng (Nitro Kart) worked his way up to the second spot, and kept on Brickley’s bumper until the final lap. Ng took over the point, however, left the door open in the final corner for Brickley to take advantage. Brickley got a good enough run to win the drag race to the line for the victory by 37 thousandths of a second. Paige Crawford (Benik) slipped past for second with Park ending up in third. Ng dropped from first to fourth in the final corner, just ahead of Kai Sorensen (Tony Kart). 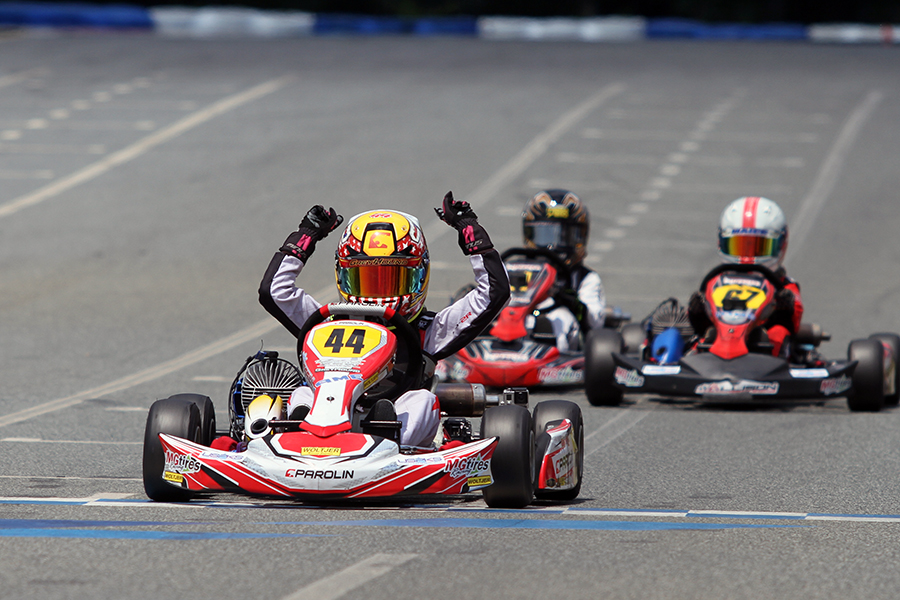 The Micro Swift division was a three driver battle throughout the day. Gavan Boschele (Nitro Kart) struck first, earning fast time in qualifying. Saturday winner Ben Maier (Nitro Kart) took the top honor in the Prefinal. Caleb Gafrarar (Parolin) was the third wheel, keeping pace with the top two. Maier and Boschele swapped the lead a number of times with Gafrarar right there. He challenge for the runner up spot with Maier with Boschele out front. The white flag waved with Gafrarar finally taking the top spot. Gavan tried in turn four but Gafrarar shut the door. That was all he needed, coming out of the corner with a solid gap to lead the final circuit and take his second victory of the season. Maier won the race to the line for second over Boschele, who was credited with fast lap of the race. Hoyt Mohr (Nitro Kart) took fourth, just ahead of Cameron Brinkman (Merlin).